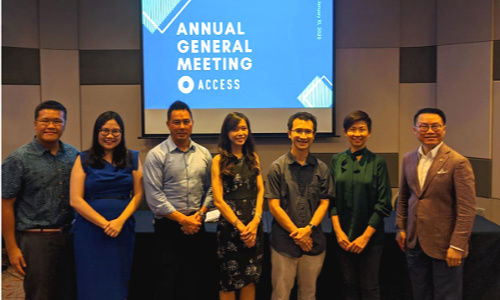 The Association of Cryptocurrency Enterprises and Start-ups, Singapore announced on Monday that it successfully ran an on-premise blockchain voting during its annual general meeting (AGM).

This makes the Association of Cryptocurrency Enterprises and Start-ups, Singapore (ACCESS) the world’s first association to officially implement a blockchain technology solution for on-premise voting beyond a pilot phase, in a live environment for attending members.

«The blockchain voting process helps uphold the true values of democratic voting in ensuring authentic votes are being legitimately accounted for with a transparent audit trail. We are seeing the future of corporate governance through the implementation of blockchain technology starting with our most important corporate governance event, our AGM,» said Anson Zeall, Chairman of ACCESS in a media statement on Monday.

The solution aims to increase transparency in the voting process, protect member anonymity in vote casting, and prevent double voting. The blockchain voting during the ACCESS AGM was executed based on the following process: members place their votes for future appointment holders and agenda items on a blockchain, utilizing the advantages of blockchain technology such as immutability, transparency, and traceability.

In addition, anonymity is established through the disconnection between members and their vote, hence a vote cannot be traced back to its originator. A list of voting codes are randomly generated, hashed and stored in a Code Management Smart Contract, before physical copies are printed as a QR code and randomly distributed to members upon registration at the AGM.

Codes are linked to neither voters nor their votes, providing anonymity. Each code status is tracked in the Code Management Smart Contract to ensure voters are only permitted to submit one vote, hence preventing double voting.